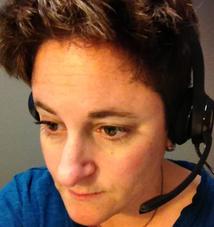 My primary passions in life are pop culture and charitable endeavors, so it is a dream come true to be able to raise money for cancer support organizations by channeling fandoms toward the greater good through Cancer Gets LOST, a non-profit that I co-founded and now oversee entirely in my spare time. Our mission is to raise money for various cancer charities via live and online auctions of rare/signed film and television memorabilia.

This incredibly rewarding journey began in 2006 when I started writing about LOST extensively on my theory blog. The site garnered attention from the right people, opportunities presented themselves and amazing professional relationships and personal friendships were formed. I transitioned from writing about TV to networking with industry connections about philanthropic projects, and now focus on producing/hosting fundraisers for Cancer Gets LOST.

On occasion, I also have the great pleasure of being asked to moderate or speak on panels at fan events and Cons!

From San Diego Comic-Con to the ATX Television Festival in Austin and many more, I love attending pop culture events on behalf of CGL year-round, with our next charity auction in mind; there are always unique items and autographs to be collected!